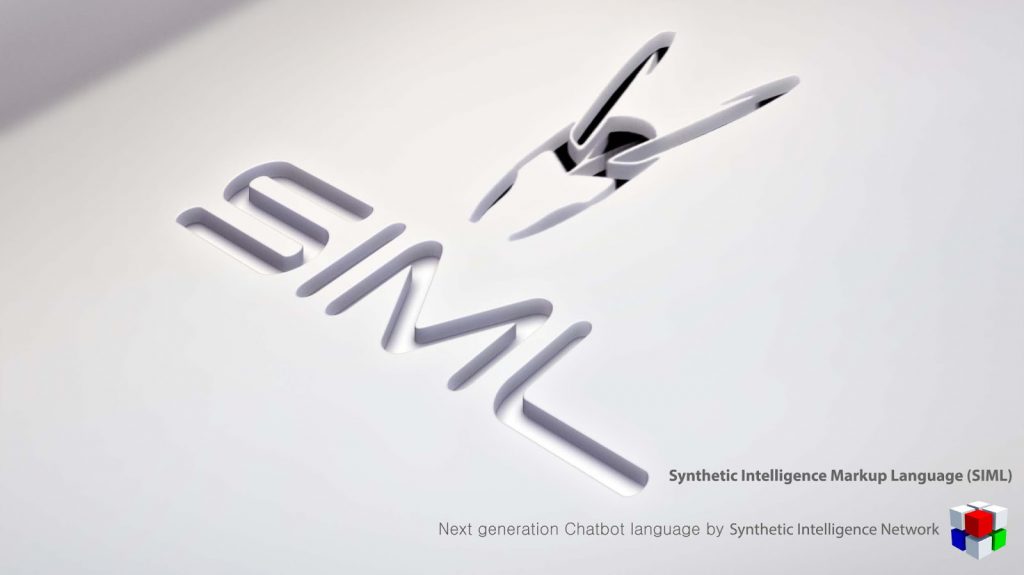 After years of research work and months of testing we have finally introduced SIML to the public.

SIML or Synthetic Intelligence Markup Language provides some the most essential unparalleled bot features that are not available in any existing bot architecture. Bots created using SIML are fast, intelligent and flexible.

SIML will appeal to both beginner and Pro bot developers as it pushes the current state of bot technology to a whole new level. SIML uses an advanced (hybrid) Graph system that enables it to have patterns of all types to be declared which may include (but is not limited to) atomic patterns, keyword based patterns, Regular Expressions, JavaScript, conditional patterns and a dozen other pattern elements.

They say that with power comes great responsibilities but the only responsibility we wanted you to have is your bot’s responses and the rest is managed by the SIML specification itself. The state-of-the-art parser used by SIML interpreter ensures that the speed of the response generated is consistent in all cases. Whether you use 1000s of Sets or Regular Expressions or even create 100s of filters for user inputs everything is achieved in milliseconds.

All SIML knowledge base(s) start with a Concept and each concept has its own attributes that alters the behavior of your bot at run-time. Every response generated by an SIML Bot is a well thought response as it always belongs to a particular topic. A Unit of knowledge is stored as an SIML Model which itself is flexible and allows multiple Models to be nested within itself. Models allow generation of complex responses that are very close in context to the user input.

A few features of SIML is as follows

All of the above and much is offered by SIML and each and every functionality is supported in its entirety. Sets and Regular Expressions work flawlessly in both patterns and responses. Random and Phrase based responses allow SIML bots to simulate a response that is very humanly in nature.

Advanced normalization and filtration enables a developer to filter out all the unimportant words in user inputs and even transform the user input to its simplest form. This paves a new way for faster contextual responses.

With JavaScript extremely complex patterns can be declared and reused from time to time. JavaScript is directly integrated into the SIML specification and the official SIML Interpreter has an in-built JavaScript Interpreter which is in 100% compliance with ECMA 5.1

SIML is the first bot Markup Language that comes with in-built support for EmotionML which is the current web standard for embedding emotional responses in entities and gives your bot the true power to simulate complex human emotions. Developer will definitely enjoy working with the official interpreter for SIML (Syn Bot) as it comes with its own 100 % standard compliant EmotionML 1.0 parser that converts and stores EmotionML emotions to .Net objects at run-time and the properties of which are publicly available.

All SIML Projects can have any number of EmotionML emotions declared in them which can later be reused.

For the entire SIML Specification please do visit our Developer Network

Official interpreter for SIML is a Single (with no dependencies) .Net Portable Class Library written purely in C# and can target any Microsoft Platform. It’s available for Free to all Single developers and can use it in both Commercial and Non-Commercial.

Syn Bot has been tested thoroughly and is currently being used by all Syn Web Assistants uploaded to our Server. Just a single instance of SynBot class is involved in powering every online assistant that belongs to Synthetic Intelligence Network. Developers can easily add a reference to the latest version of Syn Bot library using Nuget.

More details on adding and working with Syn Bot ( SIML Interpreter) in your .Net project can be found here.

We didn’t just want to bring in an advanced specification but instead we wanted to provide developers with all the tools required to create an SIML Project and to deploy their Bots in their applications. Therefore the first thing we created for SIML is the Bot Studio which comes with dozens of great features like Auto-Completion, JavaScript Evaluator, Regular Expression Tester, Real-Time Response Statistics, Stack Information, AIML to SIML Converter, Project Stats and even Code-Analysis.

As the official interpreter for SIML (Syn Bot) is upgraded frequently it was important to us that we deployed the updated version of the interpreter with the Studio and hence we decided to make Bot Studio a ClickOnce application that updates itself automatically by checking our server that is specially dedicated to Syn Chatbot Studio.

Bot Studio is the only tool a developer will require while working on an intelligent Bot project.

Is Syn Virtual Assistant going to use SIML in the future ? Absolutely. We have plans of replacing the support for old versions of Verbots, Pandorabots and AIML with SIML as it offers an extremely rich set of features that encapsulates all the features offered by the bot systems currently supported by Syn Virtual Assistant. With the integration we believe Syn Virtual Assistant will support 100s (it not 1000s) of new functionalities and will definitely help us in creating a better, intelligent, flexible and multi-lingual Virtual Assistant for high-end desktops.